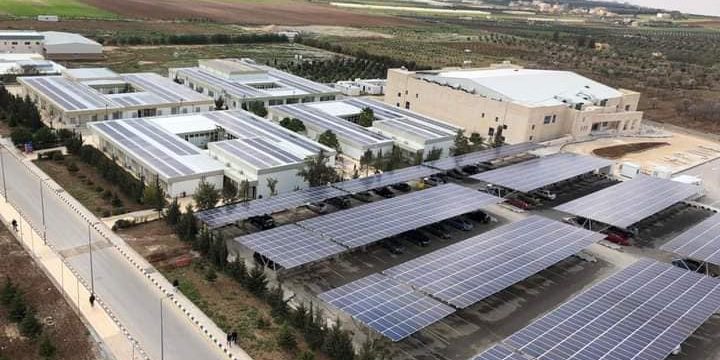 The President of German Jordanian University (GJU), Prof. Manar Fayyad, said that the university was able to recover the value of the investment project “Anwar” – the 2.11 MWp solar power plant, which worth 2.3 million Jordanian dinars, during two years, eight months and 15 days.

Fayyad added that this achievement was achieved in the middle of last July, as the production value of the project during the three years until the first of this month reached about 2.51 million Jordanian dinars.

Fayyad indicated that Anwar project is considered essential to support the university’s budget by reducing the electricity bill, which will reflect positively on GJU. She added that the project symbolizes the core idea of GJU that adapts the applied approach in teaching and training, besides the focus on sustainable development, pointing out to professors, engineers, technicians, and students’ participation at all stages of the project.

She explained that the project is the result of the efforts and cooperation of many bodies inside and outside the university, especially the Ministry of Higher Education and Scientific Research in Jordan, where they provided the necessary funding for its implementation through the government grant to support the University projects in addition to the library and sport hall projects.

The Dean of Graduate Studies and the Project Supervisor, Dr. Munjid Al-Sharif praised the great efforts made by GJU’s faculty members from the School of Natural Resources Engineering and Management (SNREM), the School of Architecture and the Built Environment (SABE), and the Engineering Department.

He pointed to the high professional contribution of the executing company, “Firas Balasmeh corporation for Control Systems” and all of its engineers and technicians who were partners in the accomplishment of the project through their cooperation with the university team, overcoming all obstacles professionally.

He added that the station system is designed to produce electricity for the University so that the photovoltaics receive energy from sunlight to be converted into continuous electricity and then into alternating current (the standard type of electricity used in Jordan) so that this system works automatically without any interference from any party other than Regular and emergency maintenance to ensure outstanding plant performance.

He indicated that the total capacity of the photovoltaic system is 2.11 megawatts of 6,702 photovoltaic cells from “Jinko Solar” installed on aluminum structures manufactured from the German company Schletter. They were distributed on Different plants inside the campus in the form of carports and aisles canopies for students and pedestrians.  In addition to plants on the rooftops of buildings and rooftops of prefabs. All forms contribute to the provision of shaded areas for cars and pedestrians and add to the aesthetic appearance of the University. Also, the carports and canopies are equipped with a lighting system that reflects a distinctive aesthetic appeal to those areas at night.